Ebenezer’s Pub in Lovell, Maine – Where Kezar Lakers Go For Beer and Hospitality

Ebenezer’s Pub in Lovell, Maine – Where Kezar Lakers Go For Beer and Hospitality 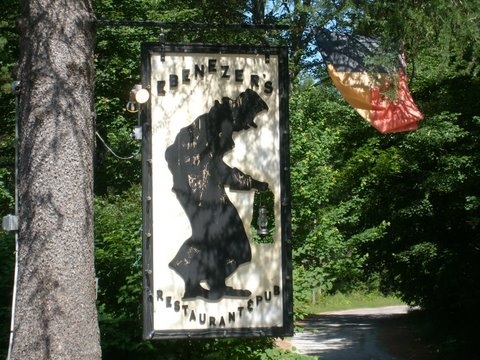 Rated #1 Beer Bar in America and the world for the last three years by Beer Advocate Magazine, Ebenezer’s Pub located just a few minutes from Kezar Lake in Lovell, is a hidden gem.
During the recent rains, we had family visiting. Since barbecuing was out of the question, we decided to drive to Lovell and show them that out of the way places offer big rewards.
My brother-in-law wasn’t sure what to expect when he pulled up to the location at 44 Allen Road in Lovell. From the outside, Ebenezer’s Pub doesn’t look like much. We assured him that the parking spot near the entrance was fine even though the green for hole 2 of the Lake Kezar Country Club was only twenty feet away. It was pouring and no one was playing golf.
Once inside, we found the restaurant full. As the hostess checked for a table to seat six upstairs, some gracious couple on the first floor moved to a smaller table so we could combine two and accommodate our party.
The friendly atmosphere didn’t end there. We ordered five beer samples. Folks at the next table noted that we didn’t get our samples on the paddle because they had run out, so they emptied one of their paddles and passed it over—it’s all about atmosphere. Then they passed off a sample of a green beer. I don’t remember what it was, but no one enjoyed the flavor of that one.
That, however, was the only thing we didn’t enjoy. In addition to pleasant patrons, our waitress was personable, the food was fresh, well-prepared and reasonably priced and the beer was excellent. Ebenezer’s boasts over 800 selections of beers with more than 35 on tap, which are mostly Belgian.
At the table to our left, three young men from the country of Norway, rather than Norway, Maine, were also enjoying their beer samples. They told us that they were traveling about the country and were currently staying in Saco, but had heard about the beer at Ebenezer’s Pub.
Chris, the owner, spent some time after working at the grill, describing beers to them and offered them a tour of the beer cellar as soon as he had a chance to get down there.
This small town pub has a worldly atmosphere. The next time you are searching for lakefront property near Kezar Lake, make sure Ebenezer’s Pub is on your “must check out” list.
If you want to take a look at the current lakefront listings on Kezar Lake just click on the button below: